To Squash, or Not to Squash

The community needs your help.

As the new year rolls in, bug fixes are the name of the 2020 game. Forget hindsight, we’re squashing these suckers now. Over the next few months, in preparation for what’s to come, one of Ascension’s major focuses will be on quickly and efficiently eliminating bugs that the community identifies. To do that effectively, you have the power. 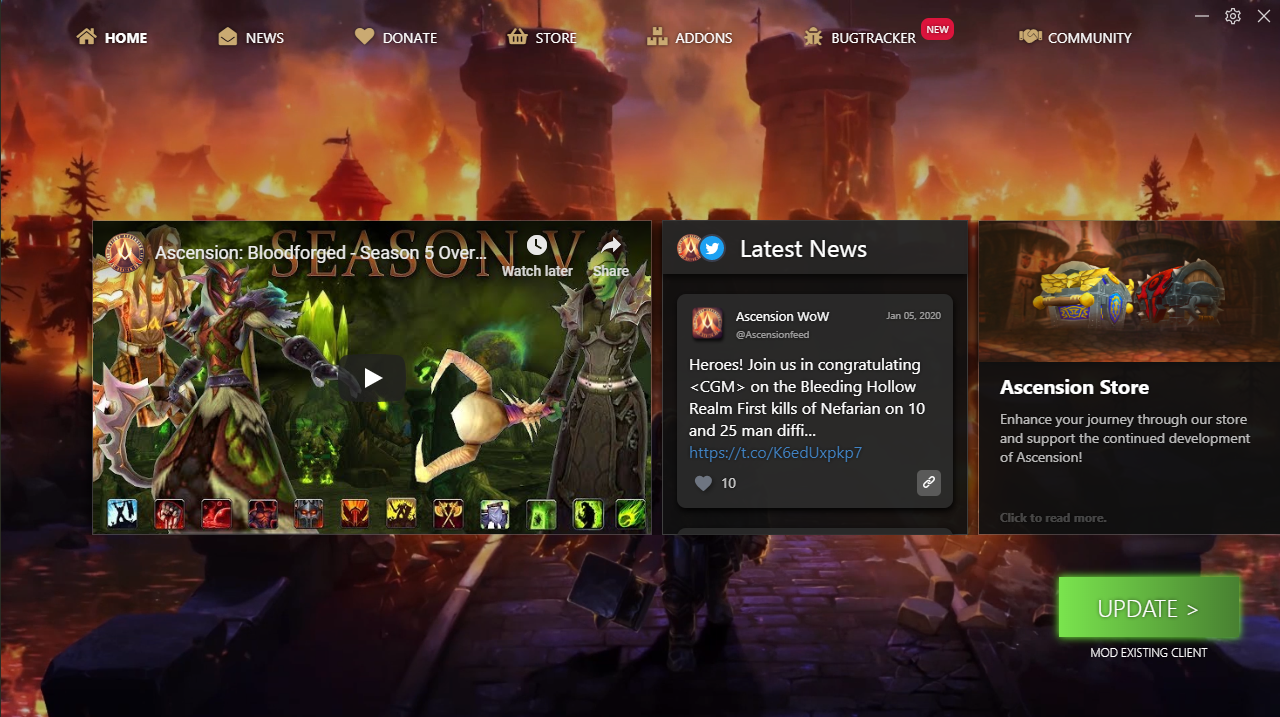 Welcome to the New Bugtracker

Nothing in a game feels worse than climbing an obstacle like a quest chain or exploration adventure only to be stopped by a bug--not a game mechanic or intentional challenge, but a bug. If Bethesda has taught us anything, it’s the absolute agony of being powerless to fix or overcome these obstacles. Luckily, bugs on Ascension can be overcome--identified and crushed swiftly as long as there are Heroes dedicated to bringing them to light. It’s impossible to find bugs hiding in the shadows, but unlike single player games, Ascension has a community: a community that can help put these issues to rest. Permanently.

The Ascension Launcher now has a new “Bugtracker” feature built in: right there at the top. Using it, Heroes will not only be able to report identified bugs, but vote on which bugs should be fixed first. 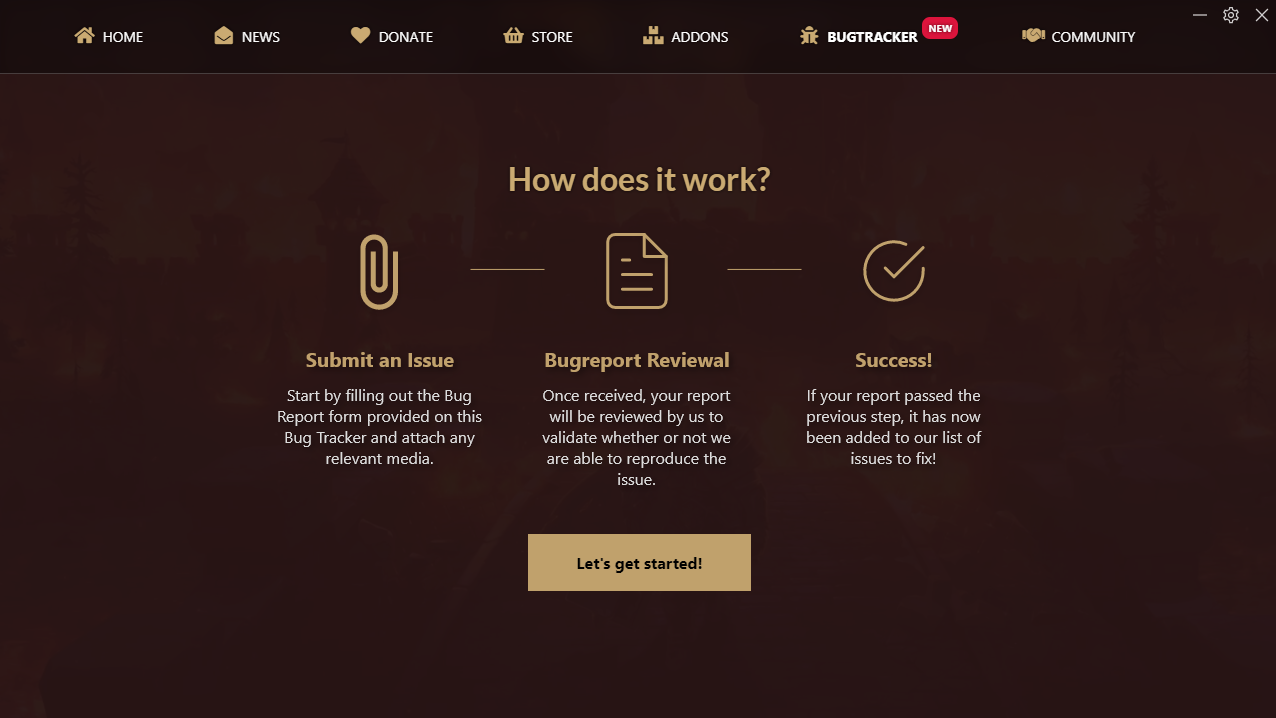 Using the new bug tracker, you’ll be able to quickly and with minimal effort create and submit a ticket straight to the developers with information on a bug you’ve encountered. Not only that, but your ticket will be publicly visible, allowing Heroes to assign it a personal priority. Bugs that the community wants fixed first will get fixed first. Bugs that might otherwise go unnoticed will get the spotlight shed on them. The more Heroes engaged in the process, the more effective the system becomes. 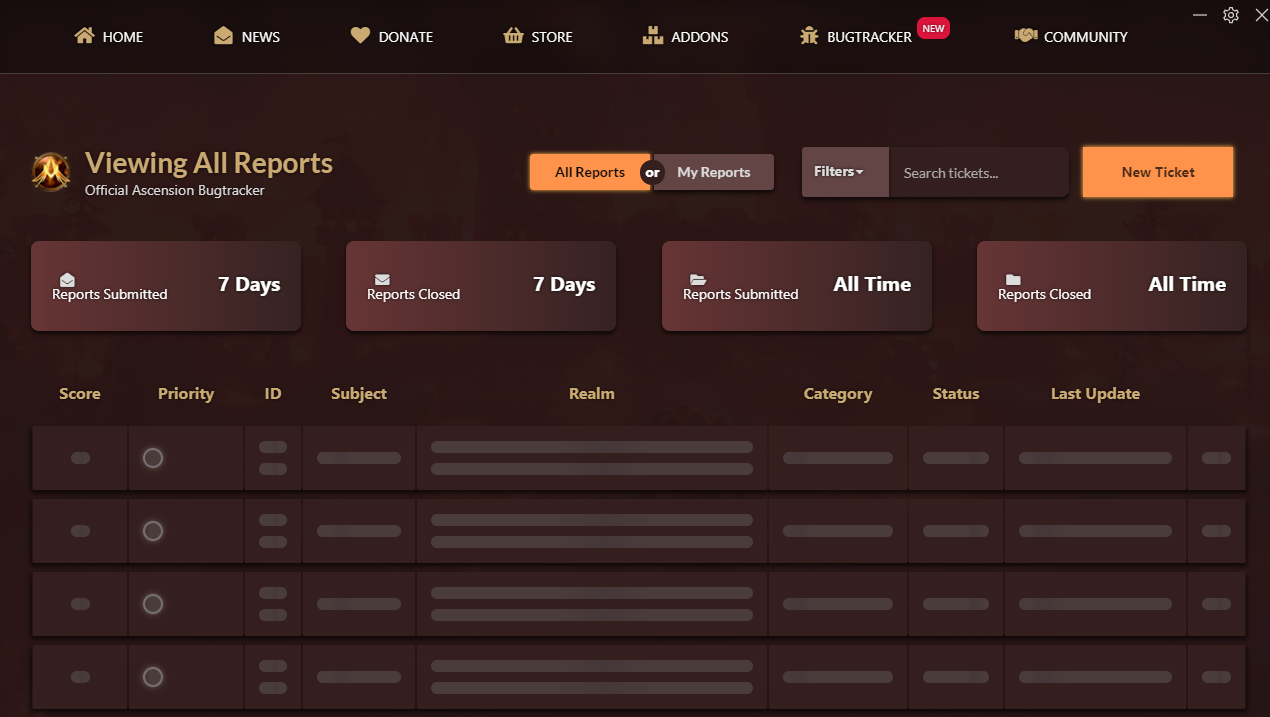 Simple. Straightforward. Just pretend there are bugs in those slots.

Why use the bug tracker?

You don’t have to. The bug tracker is not a chore for Heroes. You don’t have to run around the world searching for them. The new bug tracker is a tool so that if a player encounters a bug that impedes their personal adventure, they can report it knowing it will get to the Devs and get fixed. This is a tool for you to make sure the things annoying you are fixed, not for you to run around solving problems--that’s what the devs are for. You just need to point them in the right direction.

It’s a big world out there, and with such a complicated game (especially with Ascension’s massive amount of custom features), it’s impossible with our small team to hit every beat. We’re only human, and we’re prone just like anyone to overlooking, incorrectly identifying, or just straight up missing bugs. That’s why this is a community effort. It takes a village, and if we work together, we can crush every obstacle that gets in our way.

Yes. With priority rating the community can voice what bugs you care about, and in what order you want them fixed. Obviously things that are game breaking will have the final priority--crashes, things that cause lag, things that make the game unplayable, etc--but beyond that, the community dictates what gets fixed.

Yes. By our actual devs, with their actual skills. Using the bug tracker guarantees your voice gets heard--not just by the devs, but by the community. We can use the system to make sure that the bugs causing the most heartache are eliminated first. Everything is visible. Heroes can leave comments and share their experiences, rate what’s causing the most trouble.

We can fix what’s bugging us if we work together. This kind of undertaking, eliminating all of Ascension’s bugs, is a big task. It’ll take every one of us, but we can make it work--and if we do, each release in the future, everything NEW that’s coming to Ascension, will be that much more epic.