We hope you had a great harvest as the last days of Fall come to a close! Speaking of great things in cornucopias, we’ve got a bunch of new updates fresh from the field straight to your door. Weekend Four is here on Season 5, and with it comes a bounty of new updates for you: check ‘em out! 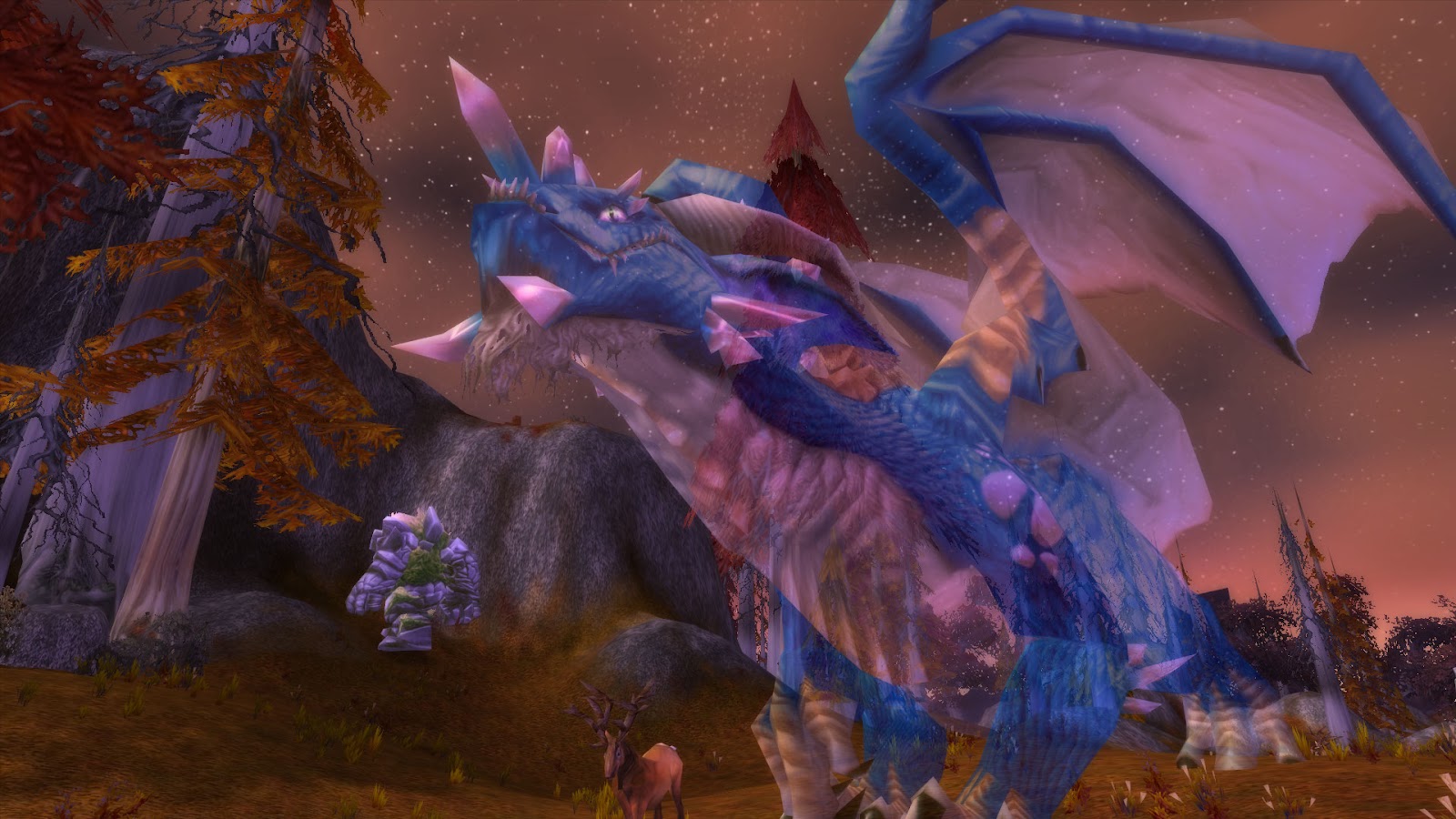 Feel that rumble in Azshara, Heroes? That’s the rumble of certain death: Azuregos, dragon of the Blue Flight, is here to protect the secrets of the Highborn! Long ago, the night elf city of Eldarath stood proudly on the coastlines of Azshara. After it’s fall, their artifacts and magical treasures were lost to the wilderness. Azuregos, as a member of the Blue Dragonflight, covets these treasures, and keeps them safe from mortal hands--will he keep you from them?

Azuregos starts roaming the wilds of Azshara tomorrow, Saturday, November 30th. Once he appears, you and your allies can engage him in combat to steal away the treasures he’s hoarded. As a World Boss, Azuregos will of course have all world boss updates: that means no matter what you’re up to, joining the fray and taking him down will be worth your while:

To start, every Hero in the raid that takes down a World Boss will snag a [Treasure’s of Azeroth]: you’ll get loot no matter what if you bring the Dragon down. Next, there’s two chances to slay him: Azuregos will appear separately in both High Risk and No Risk, meaning if you’re really dedicated you could potentially grab his loot twice. Additionally, it also means that just because your group didn’t grab him in one of his phases doesn’t mean you can’t grab him in the other--if a group is engaging him in No Risk, pop into High Risk and try your luck there--just be careful on the hunt Heroes: criminals, outlaws, and members of the opposite faction might be waiting for the chance to take you down. Of course, that also means a well-placed assault on an enemy guild might net you an Azuregos Kill and loot from Fallen Heroes…

Also don’t forget: Azuregos is a kill-quest on the Call Boards. The Blue Dragon’s death seems to be of interest to more than just the Heroes of Azeroth, and whoever runs the Call Board seems willing to offer huge rewards to players who lay the dragon low. With potential loot from Azuregos himself, the [Treasures] he drops, and also the Call Board rewards, your single boss kill has the potential to net you massive rewards. When you see that spawn announcement appear, it’s time to gather your Raid, Heroes--Azuregos awaits, and you won’t want to miss his downfall. 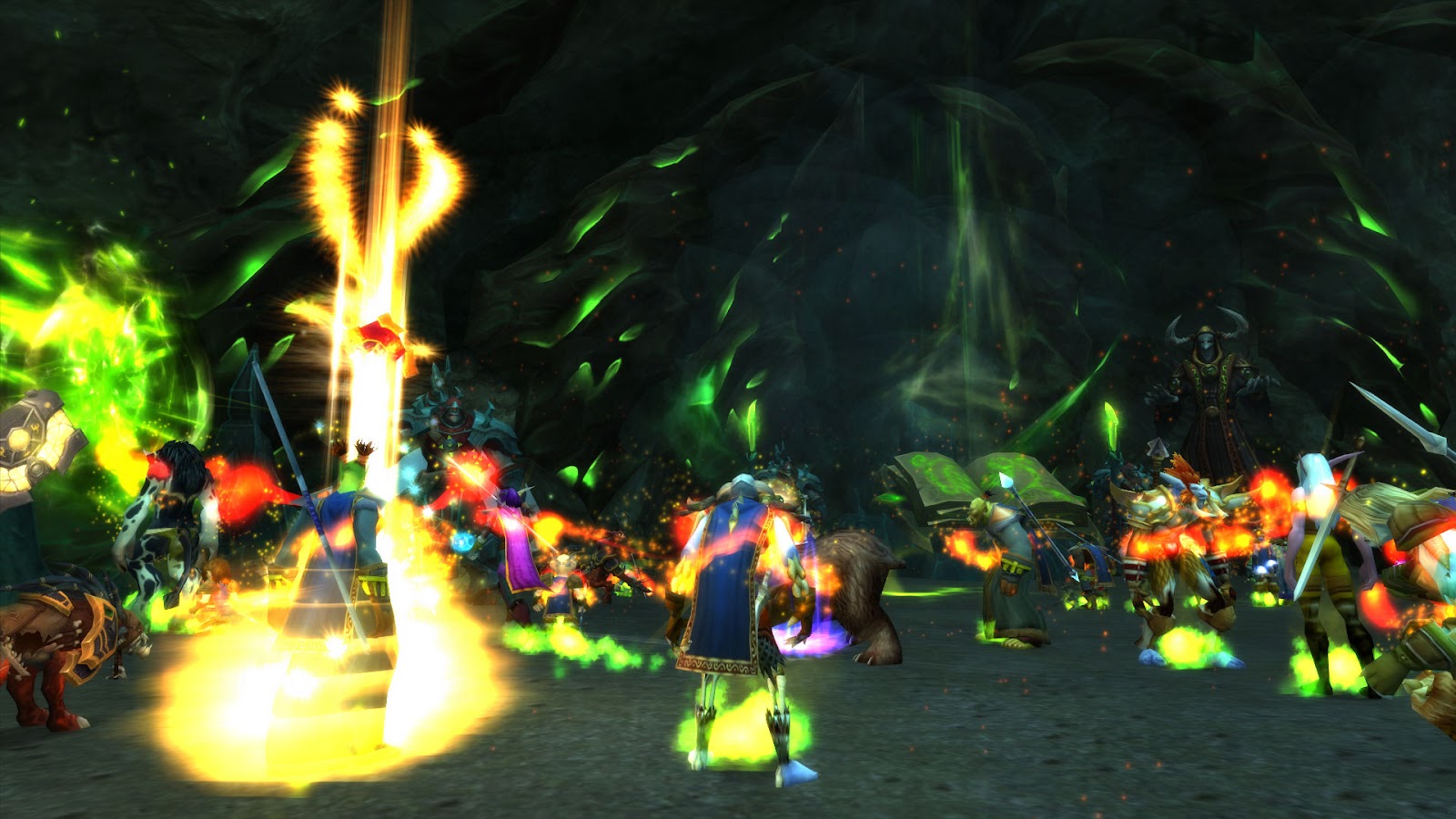 How are you feeling about the loss of your soul, Heroes? Does the Legion’s power fill the hole where the core of your very being once rested? If so, congratulations: you’re a full-blooded demon. If not, the Legion Faction is getting a few tweaks and updates to make their bargains more tempting:

The Heroes of Azeroth are well aware of the reason for the demon amy’s title of “Legion”: though they may be slain on Azeroth, their souls return to the twisting nether to rest, reform, and regenerate--essentially making their forces unending. For a member of the Legion, dying on Azeroth is merely a setback--and now, that’s all it is for you, too: dying as a FelTouched Hero merely sets you back.

With this update, FelTouched Heroes, rather than dying permanently, are sent back to the Twisting Nether and reset to level 20. Though their inventory and bank items are lost to the Nether, they keep the spells and abilities they possessed at level 20. That means, rather than having to create a new FelTouched Hero after being slain, you can now die, assess what went wrong, and jump right back into the war. Keeping the abilities you obtained from levels 1-20 means you’ll always have a familiar, comfortable core kit, and resetting rather than dying permanently means the cost of failure is a little less steep. 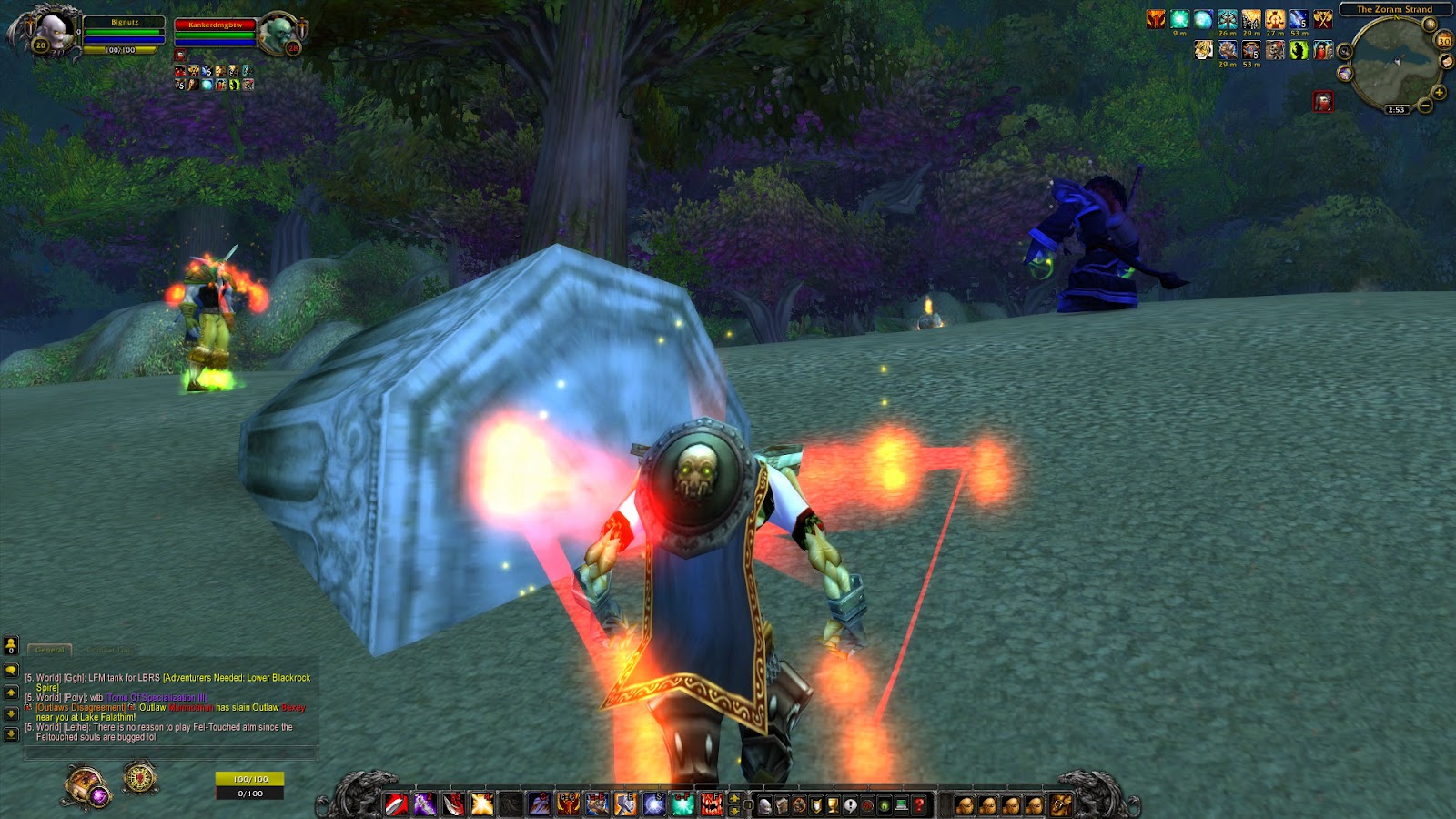 Additionally, with this new update souls are now Character Bound, meaning you’ll no longer lose them spontaneously! It also means you can collect and power up your FelTouched Hero knowing it’ll be sticking around, grabbing the upgrades you want for your character. It’s worth really thinking about what abilities you want to start with, and where your talent points are best spent for maximum invasion potential. Snatch up the souls of the fallen, spread the Legion’s dominance, and empower your FelTouched Hero to become a force of Fel Magic.

Finally, though falling on the material plane is still painful, jumping back into the fight won’t be--the Legion has dropped Felforged Chests along the Zoram Strand and other entry level areas for FelTouched Heroes to obtain! These chests can contain all manner of gear, but only FelTouched Heroes will be able to access them. Chests on the Zoram Strand have upgrades for your level 20 starting equipment, and Legion Caches of all levels can be found with upgrades in various areas. Be on the lookout for Felforged chests out in the world!

A few other tweaks arrive with the first FelTouched Update:

First, ‘bonanza’ is a great and underused word. Second, we’ve got tons of bountiful bonuses for Heroes hungry for savings! To start, enjoy 50% bonus EXP all through Cyber Monday! There’s never been a better time to try out Ascension--with bonus EXP, you can skyrocket your way through levels on Draft Heroes, destroy your opponents with FelTouched Heroes, or dive into our challenge modes as an Iron Man, Survivalist, or Resolute hero--grabbing all the rewards that come with them. Grab Mystic Runes, Orbs, Gear, and more when you finish a Challenge Mode and power up your Hero to new heights!

Next, all through Cyber Monday grabdouble DP for any DP you pick up! Got your eye on a mount or cosmetic set? Now is the time to grab it--with double DP, you can grab twice as much stuff for the same price--talk about savings.

Finally, the deals only get better--in addition to double DP, the Supporter Shop has sales going every day through Cyber Monday! The deals include cosmetics, mounts, support items and more! Each deal will be announced on the Twitter when it goes live, so check up often to see if the loot you want goes on sale! Then, in addition to those savings, there’s also a brand new vendor hanging out by Tiraxis with sales for the Ethereal Bazaar--items that are usually rotated randomly through Tixaxis’s wares are now available for you to purchase directly. If you see a mount or cosmetic that you’d love your Hero to roam around on, now is the time to grab it--if you miss your chance, there’s no telling when it might appear on the Ethereal Bazaar again. Don’t miss out! 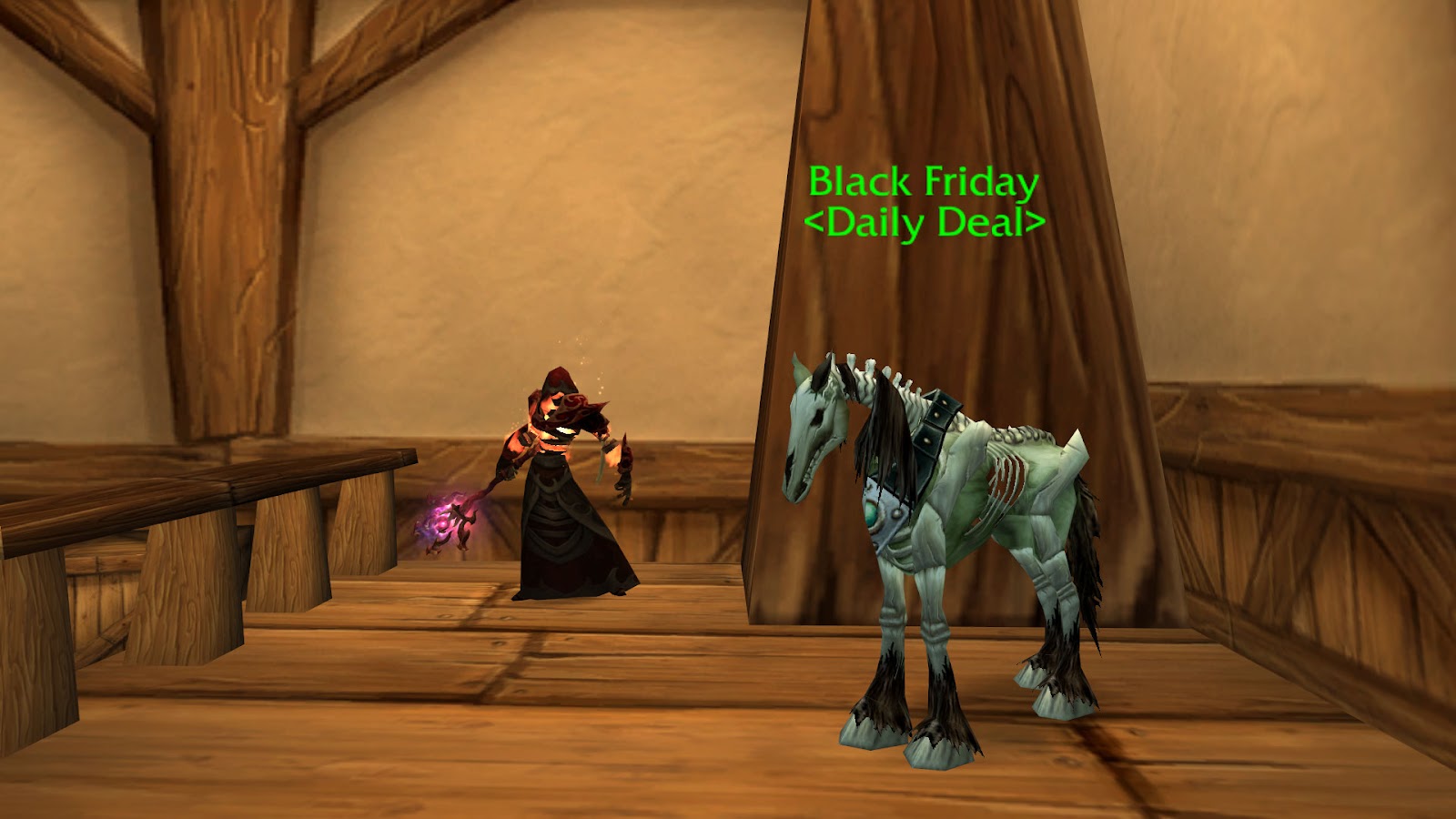 Lastly (but not leastly!) we’ve got some updates, changes, and reminders for this weekend:

First, don’t forget our Battle Brawl happening Saturday at Primetime! This big ole’ Battleground will feature 40v40 Arathi Basin for the entire 2 hour duration! Queue for AB, jump into the battle, and see if you can lead your team to victory. Then, win or lose, queue up again to battle it out for a whole two hours--gaining Honor has never been more fun.

Second, we’ve permanently reduced the cost of the Ace of Talents by 50%, bringing the exclusive card from 100 Marks of Ascension down to 50. The Ace allows players to re-select their level 60 abilities, refunding you 5 Ability Essences to spend as you please. Whether you made the choice long ago and want to switch it up, think you could have chosen better, or just want a change of pace, you can now do so at half the original price. With the Ace of Talents, powering up your Hero has never been easier.

Finally, we have a small set of balance changes coming Saturday for all Heroes to enjoy, so keep an eye on the changelog to see if your spec is getting stronger.

We hope this weekend makes your Harvest Season that much more bountiful, Heroes! With a cornucopia of savings, a basketful of improvements, and even more updates on the horizon, there’s never been a better time to jump headfirst into Season 5!

We’ll see you on the battlefield.